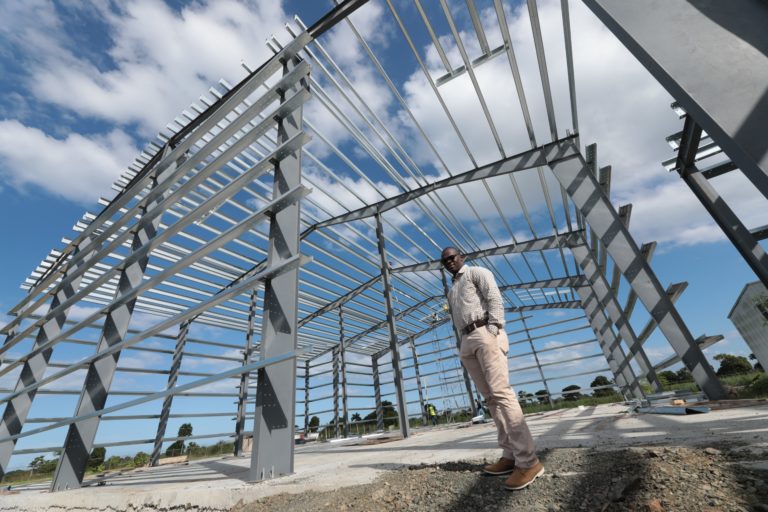 Meds & Food for Kids has a dedicated and talented team of Haitian employees on-the-ground in Cap-Haitien, Haiti. During this time of COVID-19, their jobs have been more challenging and required adaptability, flexibility and ingenuity. A strong leader possessing those very qualities is MFK’s own Remenson Tenor.

Remenson is the son of a pastor and grew up in northwest Haiti in Port-de-Paix, Môles Saint Nicholas and Jean-Rabel. After completing high school, Remenson moved to Port-au-Prince to study civil engineering at the University Ruben Leconte. Remenson left Haiti temporarily to move to St. Louis, Missouri where he continued his studies at Florissant Valley Community College. He completed his bachelor’s degree in business administration at Madonna University in Michigan.

Remenson was first introduced to MFK during his time in St. Louis. After learning about MFK’s mission in Haiti to fight malnutrition, he knew MFK was an organization he wanted to work for when he returned to Haiti.

“Where I am from, I used to see a lot of kids suffering from malnutrition and if I cannot feed them myself, the best I can do is be a part of the plant that makes the product. So, for every child that is saved by our product, whether in Haiti or elsewhere, I know I am now part of making the change.”

Since joining MFK in July 2019 as the Plant Manager, Remenson has been mastering his skills supervising and coordinating the supply chain operations, ranging from procurement of goods and materials to the delivery of the finished product to MFK’s customers. He currently leads five departments: logistics, quality control, production, maintenance and peanut processing. He appreciates the opportunity to become a better manager and effective team player. Additionally, working at MFK has allowed him to push himself to the limit by learning to step up and manage crises such as fuel shortages, strikes and COVID-19 that could affect the business overall.

What’s a day-in-the-life of an MFK Plant Manager look like? Remenson starts each day reviewing the previous day’s production, any breakdowns and down times, meeting about production planning and scheduling, addressing any customer-related issues, interacting with other departments such as human resources and sales, and liaising with the MFK U.S. staff.

When he’s not working, he enjoys spending time with his wife, Cynthia, and his daughter, Abby-Gaëlle, dining out, going to the beach, singing, and dancing. Remenson likes soccer and is a big fan of the Haitian and the Brazilian soccer teams. He also enjoys cooking and might want to be a chef someday.

Remenson had this to share with MFK supporters and friends, “You should know that your support is precious for our people. Haiti is one the most beautiful countries in the region, but also the poorest. Your contributions to MFK help save lives of malnourished children, but also help uplift the economy. I really appreciate what you do and thank you all for your support.”

His favorite part of working for MFK? Remenson says, “There are many things, but contributing to saving lives, boosting the economy by training farmers and sourcing peanuts locally, and putting a smile on kids’ and parents’ faces are the things that inspire and excite me every morning I wake up. In other words, this is a good way for me to give back to my country and be an agent of change.”