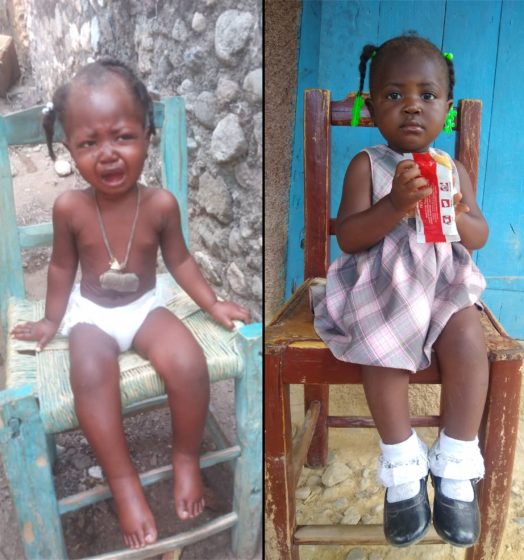 Bahon is a beautiful community located in northern Haiti. To get to Bahon, it takes over two hours by car through very rural areas with bad roads. Each Tuesday, the parents of children in the malnutrition program supported by MFK have to climb up and down mountains or hire a motorcycle taxi to take them to the clinic to get treatment and support. A Haitian nurse and health agent work together each week to ensure the children can be seen and their height and weight can be collected to track their progress.

MFK’s nurse visits Bahon on a regular basis to provide consultation and support to the nurse and health agent, and we also donate all product needed to treat the children. One recent graduate of the malnutrition treatment program is Roselande. Last month, thanks to Medika Mamba, she returned back to life. The younger of two children, Roselande was 19 months old when her health began to deteriorate due to malnutrition. She began experiencing fever and diarrhea, her appetite lessened and she became puffy and swollen with edema. Her parents reported that she cried all the time. She weighed only 19 LB, with her edema.

The local health Agent, Cyliac always traverses the mountains to reach out to the malnourished children in need of treatment. He met Roselande’s Mom and advised her to bring her daughter to Bahon clinic to be screened for malnutrition. After the screening process, she was referred to MFK partner, Danita’s Children, with severe health complications from malnutrition. Roselande spent two weeks receiving Medika Mamba and other medical treatment. Once she was recovered enough to leave the health center, she was admitted back into the malnutrition program at Bahon to complete her treatment. She graduated the program at 22 LB.

Roselande’s Mom was so grateful for the malnutrition treatment and support that her daughter received at both locations. She thanked our team for giving her daughter a second chance at life.